I studied art at HKU in Utrecht where I graduated with a fine arts degree. Curiosity to understand my body and integrate movement into my visual work led me to study dance at AHK in Amsterdam. I spent many years of my professional life working in the field of experimental dance, theatre and performance art and have developed and coordinated a number of artistic, educative and social projects in Europe and Latin America.

For the past few years my practice has returned to the fine arts, working on land art projects, photography, video installations and more recently sculptural objects. My work is deeply rooted in nature, materials and the context in which I find my self.

Repetition is the core of most of my work.  Everyday materials or actions in time transform themselves to a concrete form.  Somehow it feels like all existence is, in one way or another, related to repetition and cycles.

The act of doing, the urge and insistence to understand the potential and limitation of materials results to the works I am creating. 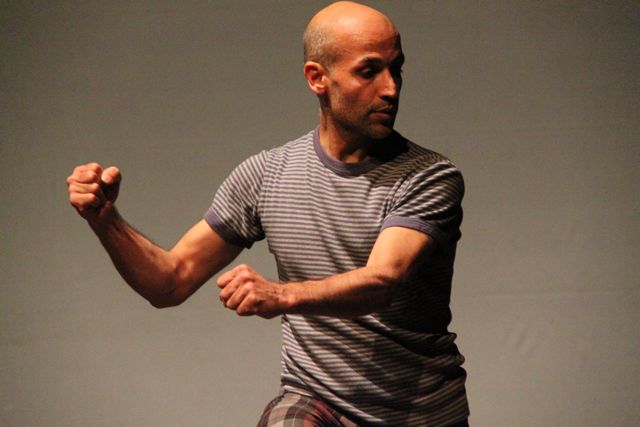 As I understood there is a space for exhibition or workshop activities.
I am aiming to create installations and objects in the workshop space in absence of Zandberg artists during the weekends and evenings.
Any one who is interested can enter the space and interact with what is there: develop, change, destroy or taking it with them to their space.
Space that I create will become a laboratory in which individuals can explore and develop new ideas for their work.
I will leave a camera in the space to make a time lab of process.
Neither of us: Zandberg artists or me won’t be present in the same time in the laboratory, nor any one teaching or giving instruction.
Depend of availability of space we can decide how long we leave the installation and when change it.
During my residency I will create work in respond to what going to happen in the Laboratory and inspirations that I get from my new environment.

Since 1995 I have performed in various dance, theatre festivals in Europe and Latin America: Those performances have included both solo work, performances with my company “Les PesPis” as well as working with other directors. To name a few:
2009 & 2011: solo performance “Thinking body 2009” and “Home2011” - Festival Internazionale di Danza "Visioni di (p)arte" organized by QuaLiBò – Bari/ Italy. http://www.youtube.com/watch?v=ftcsqDeVaEw
2005: I performed in “Bache” directed by Koen Augustijnen: dance/ theatre company; “Les Ballets C. de la B” http://www.youtube.com/watch?v=apEQQeDlGb8

Fronteras was created as a reaction to the social and cultural condition of the community, a multidisciplinary platform for the exchange of art and art education between the artists/activists and individuals who are members of marginalized community, and therefore at the fringes of society.

Fronteras project is active since 2009 and so far has taken place in Peru, Argentina, Chile, Mexico, Brazil and Italy (in different cities).

Links to an interview in relation to Fronteras project and local projects.

I.P.L is an international network of multidisciplinary artists in Latin America and Europe. Network aims to encourage young artists to find their artistic identity; by creating a platform for exchange of their ideas and offering them tools to develop their artistic work.

I.P.L project is active since 2004 and so far has taken place in Sweden, Italy, Belgium, Peru, Argentina, Chile, Mexico, Brazil and Uruguay (in different cities).

2009- 2018 The government of Matao (a small city in Sao Paulo/ Brazil) offers full support for project Fronteras. As well as donated an old school building (Casa Pipa) to the project in which artistic, social and educative projects taking place. https://www.casapipa.art.br/

Since 2000 I have been working as an international guest teacher in Europe, North Africa, and Latin America. I taught in different Universities of stage and visual arts and dance/theatre companies such as:

I designed/fabricated furniture from wood and steel, cast bronze sculptures, designed, light, stage, costumes, jewellery as well as worked as a photographer.